Boater & his dog die on board boat 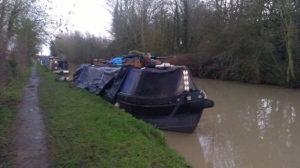 Local Boaters we shocked to learn of the death of Spike & his dog Millie on board their canal boat Samara at Banbury.

His brother Shaun has asked us remind people to check they have a working Carbon Monoxide alarm and adequate ventilation.

Spike & Millie were well known throughout the boating community both locally and by those travelling through our area.

Our sympathies are with his family and friends at this sad time.

The cause of death is still being investigated but Watch Manager John Calloway of Oxfordshire Fire and Rescue issued a statement saying:

“Although the cause of this tragic incident has yet to be determined and is an ongoing investigation by the police, there are a number of appliances common to both boats and caravans (as well as houses) that have the ability to produce toxic fumes.

“It is our advice that all such equipment is professionally installed by a qualified technician and serviced regularly in accordance with the manufacturer’s instructions.

“We also recommend that both smoke and carbon monoxide alarms are fitted and tested weekly.”

Mr Mason who was 63-years-old, and his Staffordshire Bull Terrier Milly were found dead by neighbours on board their canal boat Samara on the Oxford Canal shortly after 1.30pm. Ambulance crews were called to the scene followed by fire-fighters who checked the boat for toxic gases before retrieving the bodies.

The cause of Mr Mason’s death is still being investigated but information released last week by Oxfordshire Fire and Rescue service suggested he may have died after breathing in toxic fumes, most probably from an on-board solid fuel stove.

We can offer a limited number of advertisements on our site in return for a sponsorship fee.